THE ALL-PARTY PARLIAMENTARY INQUIRY INTO ANTISEMITISM

The All-Party Parliamentary Group Against Antisemitism commissioned an Inquiry into the state of antisemitism in the UK in 2005. Over one hundred written submissions were received from a wide range of agencies, organisations and individuals (see a selection of the written evidence submitted by clicking on the relevant paper). The MPs involved found that there had been a rise in antisemitism in the UK and was shocked by what they learned during the process of the inquiry. As a result, they published a report with 35 recommendations for government, Parliament and civil society in 2006 which paved the way for addressing antisemitism in the UK.

The opposition parties and a number of other organisations responded to the inquiry report. To see a selection of those responses see the following links:

The British Government responded formally to the all-party report and subsequently on progress against the various recommendations. The responses can be downloaded on this tab and are as follows:

The government officially responded to the All-Party Parliamentary Inquiry into Antisemitism with a Command Paper in 2007.

In 2008, the government published a One Year On Progress Report that highlighted 14 key achievements and actions plans for 8 different government departments.

The Government reported to Parliament for a third time about progress to implement the all-party report in 2010.

A Department for Communities and Local Government report was released in 2014. This was the final report on efforts to implement the 2006 inquiry but Government committed to reporting on action to address antisemitism annually from 2016. 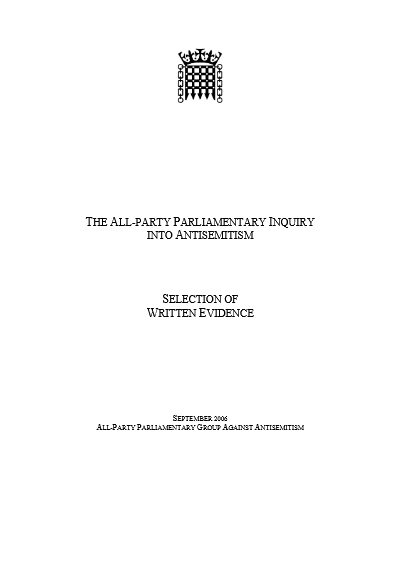